As I mentioned the other day, I recently attended the Royal Highland Show. I was, I admit, tempted by more than one thing while I was there … I spent some time looking at tractors and other several other agricultural type machines that did look very futuristic indeed and would be more at home in a ‘Transformers’ film than trundling round a field. 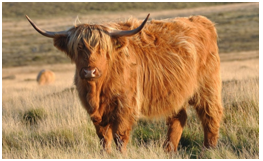 What really caught the eye, however were the ‘coos’ (which, I’m sure you’ve guessed, is the way ‘cows’ is pronounced north of the border – possibly not by everybody but certainly by many of those milling around the show) and if you’re not familiar with the rather distinctive look and character of the Highland breed, they look just like this:

Now, there was much ‘oooooh’-ing and ‘aaaah’-ing among those in our group and while I will admit the calves  were incredibly cute, I repeatedly refused appeals to acquire one and somehow smuggle it home … a standpoint that was generally judged to be ‘unreasonable’.

I sauntered on unperturbed and came across an area that you might think was put there entirely for my benefit … a stall full of very British, mildly eccentric clothing and accessories. Now, before you assume I simply walked in, said ‘I’ll take one of each of everything, my good man’ and spent the rest of the day happy – there is something I need to point out.

As nearly everybody else was dressed in the traditional Scottish summer garb of waterproofs and a very large coat – I was already adjudged to be dressed eccentrically enough in my light jacket and panama hat (I was informed more than once I looked like the ‘Man from Del Monte’) – so I erred, possibly for the first time, on the side of caution and merely purchased a rather fine cap.

I could have left with much, much more and it would have been very easy to do – as I mentioned above it looked as though the area was tailor made for me … it had the right sort of items, the right sort of ‘feel’ to attract people like me (I wasn’t the only very British, mildly eccentric soul that had been tempted in) and as a result I didn’t need to be ‘sold’ anything.

This is something you should bear in mind with your own efforts. Not necessarily to be very British and mildly eccentric (though of course I would approve of that) but to create a ‘feel’ for your project designed entirely to appeal to your ideal customer.

For instance, if your research points to the fact that your ideal customer also has a liking for Jaguars and Rolex watches, then it should not be too much of a stretch to work out that providing these people with a product or service successfully will require a website that is heavily influenced by these two brands in its look and feel.

Remember, there are clues just like this all around you … so spotting them and using them to your advantage can heavily influence whether your project stands or falls…